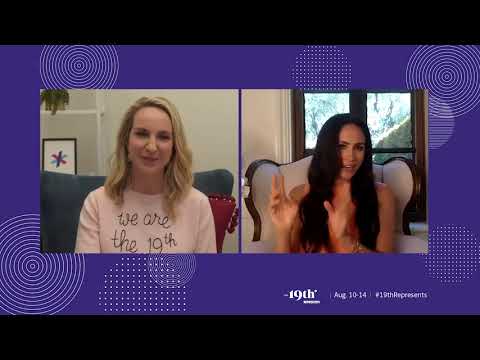 International Entertainment
August 17, 2020
Under One Ceiling 0

On Friday, the Duchess of Sussex interviewed Emily Ramshaw, the CEO and co-founder of The 19th, the new news site creating content specifically for and about women’s issues and politics affecting women. Again, Meghan was not being interviewed, she conducted the interview. But she still made news because of the conversation with Ramshaw. I’m including the full video at the end of the post – superficially, Meghan looked great and very relaxed. We know that she filmed this in her new Montecito home too, so we got a tiny glimpse of the furnishings, and it seems okay. They still haven’t said anything about a pregnancy so here we are, looking at Meghan’s luxurious long, wavy hair, looking like she’s taking prenatal vitamins or something. You decide! Here are some highlights from Meghan and Emily’s conversation:

Coming home to America as George Floyd, Breonna Taylor and Ahmaud Arbery were murdered: “Just devastating. It was so sad to see where our country was in that moment. If there’s any silver lining in that, I would say that in the weeks after the murder of George Floyd, in the peaceful protests that you were seeing, in the voices that were coming out, in the way that people were actually owning their role … it shifted from sadness to a feeling of absolute inspiration, because I can see that the tide is turning.”

She looks forward to working on race issues: “From my standpoint, it’s not new to see this undercurrent of racism and certainly unconscious bias, but I think to see the changes that are being made right now is really — it’s something I look forward to being a part of. And being part of using my voice in a way that I haven’t been able to of late. So, yeah, it’s good to be home.”

Salacious gossip over real news: “What’s so fascinating, at least from my standpoint and my personal experience the past couple of years, is that the headline alone, the clickbait alone, makes an imprint. That is part of how we start to view the world, how we interact with other people.”

She’s talking to Gloria Steinem: With the November election fast-approaching, Meghan stressed that voting is “incredibly important” to her; she said she’s even been talking to feminist icon Gloria Steinem about it. Meghan encouraged people not to take suffrage for granted, noting that her husband has never been able to vote. “People are craving a change. In the place we’re all in right now, there’s such a moment where people are starting to question the systems we’ve always believed in.”

The word “suffragette” was intended as a pejorative: “This term, coined by one man in 1906, has stuck as part of a movement. When you look at that, and look through that lens of the power of one person’s influence in the media to be able to shape an entire movement or way of thinking … If women had their voice heard as equally, how different that would have been.”

I agree with what she’s saying here, and she’s not saying anything controversial or even “political” honestly. I mean, what does it boil down to? People should vote; the right to vote is important; we’re in a time of national and global change; people pay too much attention to salacious gossip; peaceful protests are inspiring. I would say that she could have done this kind of thing as a member of the royal family, but… you know, of course she couldn’t. If she had done something like this when she was still a “senior royal,” there would dozens of Daily Mail stories like How Dare She Wear Her Hair Like That, Courtiers Say Meghan Had a Tantrum Over Zoom, Meghan Pulls Focus From Prince Charles’ Vital Tour Which No One Was Paying Attention To, and finally, Meghan’s Hair Made Kate Cry. She also would have needed approval from six courtiers, three private secretaries, the Lord Chamberlain and two corgis. So no, they wouldn’t have allowed her to do this.

Screencaps courtesy of The 19th video.

0
0   0
previous Trump's QAnon Silence Gives “A Wink and a Nod” to Domestic Terrorism
next Our eye makeup needs to up its game now face masks are an essential accessory...