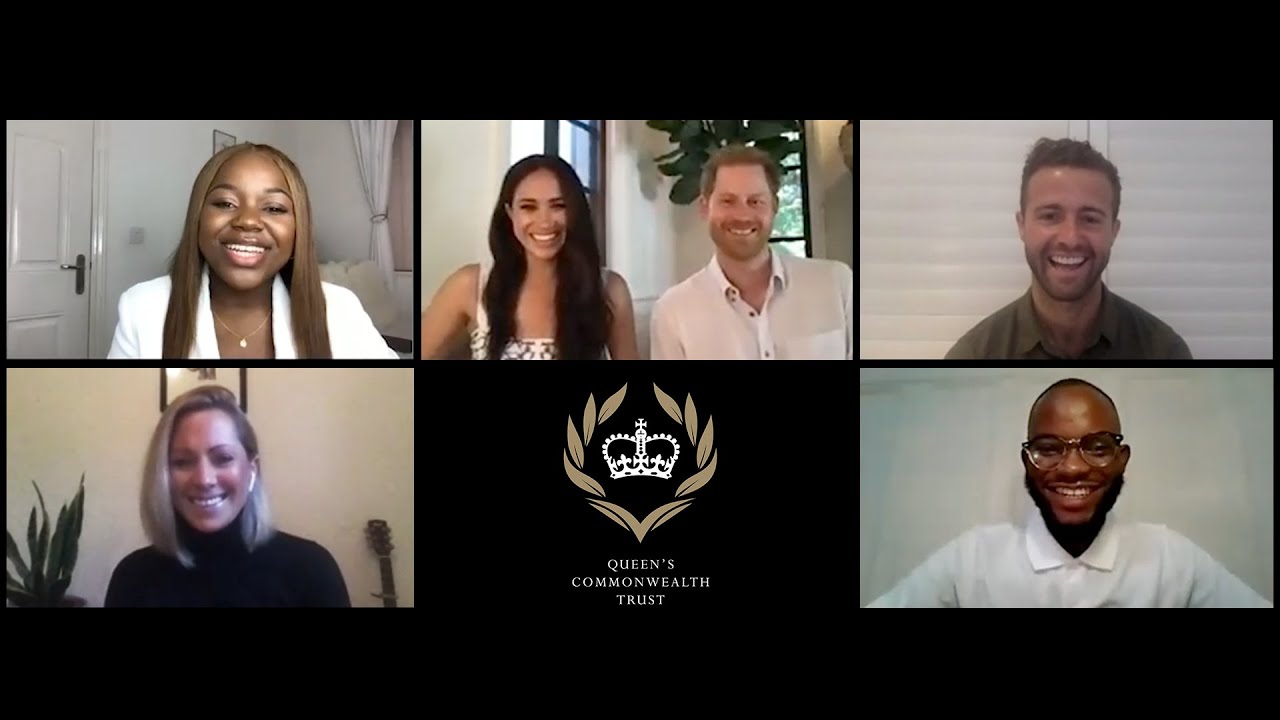 International Entertainment
August 23, 2020
Under One Ceiling 0

Here is a video of the Duke and Duchess of Sussex doing a Zoom call with a “group of young leaders” about social media and the online world, all on behalf of the Queen’s Commonwealth Trust. I’ve said this before, but I wish M&H would stop working with the QCT – H&M were basically run out of England because of Meghan’s race, and now the QCT uses Meghan’s race as some kind of visual tokenism to appeal to the very racially diverse commonwealth nations. I know Meg & Harry care about this issue, but the video is kind of boring. (Also, Meghan doesn’t look pregnant at all in this video, I have to say.)

Meanwhile, Omid Scobie is still doing the promotional rounds, and he did a great interview with The Cut (part of New York Magazine). The Cut says it outright, that the institution of the monarchy ultimately failed the Sussexes and failed to protect them. You can read the full piece here. Some highlights (all quotes are from Omid):

Meghan’s differences were weaponized against her: “But, ultimately, it was her differences that were weaponized against her. All the things that made her exciting at the beginning were suddenly the things that made her annoying or problematic for the institution. Many within the royal press core are the gatekeepers to information about members of the royal family. And that’s why, often, we find that the narrative set by certain British tabloids sets the tone for the rest of a royal’s working career. But I think what was more worrying was that I noticed that a lot of the stories that painted her in such a light were often coming from within the palace itself.

Whether the negative stories were coming from staff or other royals: “We have an interesting system within the palace as a whole. There are different households: Clarence House, Kensington Palace, and Buckingham Palace. Each one has the responsibility to look after the royal family members that they work for. These are the private aides, the communication staffers, the courtiers. They’re the characters that work behind the scenes. Often, it’s a popularity contest: Members of the royal family are almost competing over coverage in the papers. For example, Charles is often frustrated that his children always get more press than him given he’s often the more hardworking member of the royal family, and there are people within his household working to make sure that he gets as much of a prolific feature for his work as possible. Often that leads to jealousy within the different households as well. [Her differences] made Meghan a huge draw for the royals — but being a draw, you will also attract jealousy.

What H&M did to combat the racist, sexist caricatures: “In the summer of 2019, Harry actually had a conversation amongst his team and his senior aides within Buckingham Palace about restructuring that press system and making him and Meghan more accessible to a wider, more diverse media landscape. And the answer was well, If you want to do that, you can pay for your own engagements. And so that was the first seed of, well, Maybe we will break away, maybe we will do our own thing…It’s a shame, because the signs were there internally for a very long time. They really made it known what their grievances were, but it often fell on deaf ears.

The most difficult time, in his view: “It was around the time that there was this obsession with Meghan’s father. There were stories about her parents appearing in some of the tabloids almost every day. They had followed Meghan’s father to a Home Depot and taken a photograph of him buying a toilet, and made a joke that it was his throne. There were photos of Meghan’s mom, Doria, going to a laundromat, and there was a very sort of ugly narrative around that. Meghan had already been called “straight outta Compton” at that point. We saw editorials talking about Meghan’s “exotic DNA” and talking about how she would “water down the blue blood” of the royal family. There was a commentary piece talking about how strange it would be for Meghan’s dreadlocked and nose-ringed mom to sit down and have tea with the queen. And at the same time, the people that were responsible for writing and saying a lot of these things were somehow being enabled to do so. There was almost a thirst for more of it. As a mixed-race Brit on the royals beat I was ashamed to even be connected to it.

Scobie sees the most difficult time as, like, the late 2017/early 2018 period of the Sussexes relationship, in case you’re wondering about the timeline. I disagree! I mean, it’s his opinion so whatever, but I think the smear campaign which began in late 2018 was the worst moment. That’s when it felt like all of the jelly haters WITHIN various royal courts were leaking nasty stories about Meghan and it really felt like she could do nothing “right.” The moment Scobie is speaking of was pretty early on in the Sussex narrative, where the British press was exoticizing Meg and treating Meghan as a novelty, because it was almost as if those old white dudes had never before realized that black women exist.

As for what he says about jealousy in other palaces and from other royals and royal staffers… I mean, Scobie knows a lot more than he’s saying. He absolutely knows which royals (and which staffers) leaked which stories.