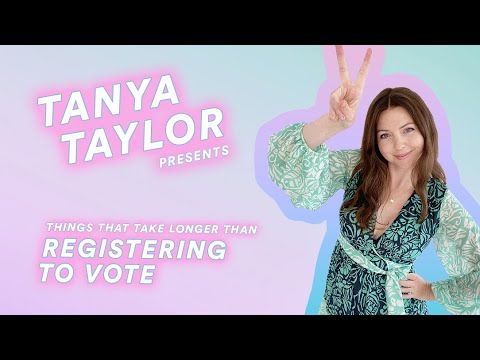 Canadian designer Tanya Taylor opted out of showing her new collection at New York Fashion Week today – a first for the brand. Instead, Taylor, whose brand is based in the city, opted to use her time slot to promote an important message for her US customers: voter registration.

Bringing together a whole host of friends of the brand, the purpose of the video was simple: Taylor wanted to show her followers everything that took longer than registering to vote (which takes just two minutes, in case you were wondering). Opening the 1:52 long video, Taylor said, “How we spend our time right now is something really important to consider, and we got to thinking that watching a fashion show actually takes more time than registering to vote.”

The brand has adopted a new approach to showcasing its collections, opting instead for a direct-to-consumer model which will see the Spring 2021 collection debut to press and consumers in January, just a few weeks ahead of when it will land in retail stores. In light of this, Taylor explained in a press release how she didn’t want to give up her NYFW slot when she could use it as an opportunity to make change. “There are a lot of eyes on us during NYFW and I feel it is my responsibility to use the platform I have within the industry to speak up and encourage positive change at such an important time in our lives,” the designer said in a press release. “Our community of strong, empowered women are the heart of our brand, and as always, we aim to empower them and lift up their voices, this time through civic action and voting.”

Given that she is a Canadian citizen, Taylor is ineligible to vote in the upcoming election however that doesn’t mean she wanted to take a seat on the sideline. “My business is a New York City business, our employees are American and leadership affects our livelihood,” she told WWD. “This is an important election and I feel a responsibility to my team and to my community to use the platform that I have to advocate for what I believe in. It’s important to still be a cheerleader even if you can’t play the game.”

The post Canadian Designer Tanya Taylor Enlists Celebrity Friends for NYFW Video That Has Nothing to do With Fashion appeared first on FASHION Magazine.

0
0   0
previous Everything You Need to Know About the Iconic Hudson’s Bay Point Blankets
next Texture Talk: Viola Davis Dives Into the Complicated Politics of Black Women’s Hair