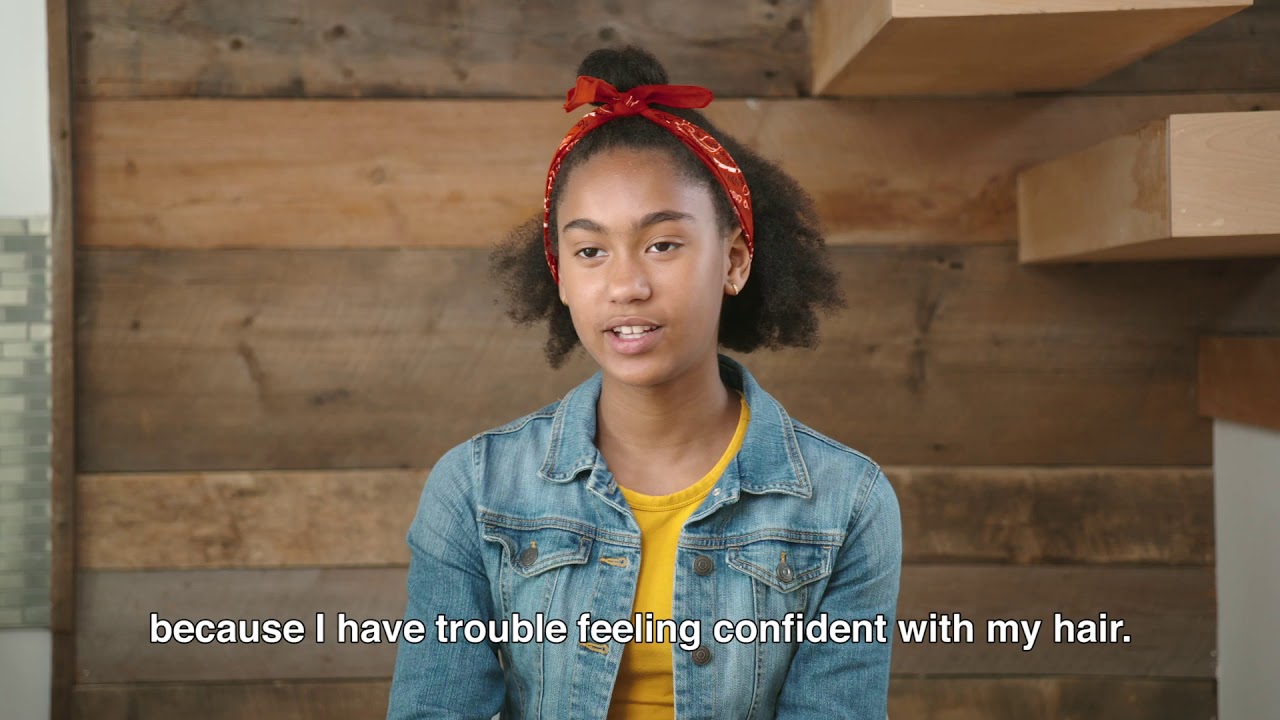 Meet Nancy Falaise, a go-to natural hair specialist based in Montreal. Before the pandemic, Nancy would close her self-titled salon one Sunday every month and lead workshops for young local Black girls struggling to embrace their respective hair textures, a passion-filled side project she started three years ago. During each gathering, the expert teaches her young attendees the curly hair basics: washing, conditioning, detangling and styling.

One day, one of Nancy’s clients caught wind of her workshops, and convinced the veteran stylist to make a documentary, which CBC Docs ended up financing. Titled Nancy’s Workshop, the documentary launched online last fall and ended up making it to Hot Docs Film Festival’s list of top 5 short films this year. Here, Nancy shares more about her passion project.

On starting her workshops:

“They started on a fluke. I kept getting these young girls in that were having a hard time. They would come in just hating their hair and their moms didn’t know what to do with it either. I would end up sitting them in my chair, taking my time with them, and explaining what to do. Finally I said to myself, ‘You know what? I should do workshops. I should get a bunch of girls and teach them.’ I did one just for the fun of it and it was such a success. Then I did two then three and, now, every time I do one, it sells out within five minutes. I don’t take too many girls, just five or six girls at a time because I want to give them my time. Yes, I make money doing this, but it’s not just about money. I would rather have less girls and teach them all properly. I’m hoping to do one workshop every week of November to catch up with the Covid closures.”

On the workshops themselves:

“During the workshops, I make sure that the girls help each other out. They think that they’re ‘just helping’ but, really, they’re learning about somebody else’s texture.”

On extending her workshops to grown women:

“I also do workshops for women, and those are always full because a lot of Black women don’t know what to do with their hair when they go back to natural. They’ve been so used to relaxing their hair.”

On the common hair narratives she sees and hears walk through her doors:

“A lot of the young girls that come and see me are biracial; their moms are usually white and have long, flowing, straight hair. And a lot of times these moms don’t know what to do. She’s the best mom in the world and she has the best intentions, but she doesn’t know her [daughter’s] texture. Then you also have Black moms that have straightened their own hair their whole life, so they also don’t really know what to do besides braiding their daughters’ hair. And when they reach high school, [these girls] often don’t want that look anymore. Plus, they don’t want mom washing their hair either. They want to do it themselves.”

On the transformations (in and out) that she sees in the young girls:

“Most of the time when they walk in, they’re very shy and don’t talk. They’re not happy to be at the salon because they think it’s going to hurt and they already don’t like their hair. They think that it’s ugly and that no matter what I’m going to do, that their hair is going to come out frizzy. A lot of teen girls that come in with curly hair all have the same hairstyle: one big mess that they just keep putting up and putting up and adding water and adding water. Eventually their hair starts to knot and lock into one big poof on top of their head, which can take me hours just to detangle.

By the time they leave, they have a smile on their face and are unanimously like, ‘Oh my God, I can’t believe my hair could do that!’ It’s like they fall in love with her hair and ultimately they fall in love with themselves because it. They’ve broken out of their shells. And the biggest differences I see are when they come back: Their hair is not super knotted and not full of stuff. They come back regularly to get haircuts. I always praise them and the moms will say, ‘Yeah, she’s been taking care of it by herself!’

Now when those girls walk in, they don’t walk in all shy. They walk in confident and are happy to talk to me about what they can do on their own with their hair. They’re wearing their hair out and freely. They’re twisting it. They’re doing curl definition. They’re braiding one side. They’re having fun with their hair.”

On making the documentary:

“When I told one of my clients what I was doing, she said, ‘Oh my God! We should make a documentary about this.’ When she said that to me, I was like, ‘Yeah, right. Who’s going to finance a bunch of Black girls doing their hair?’ That was my thought. But I told her that if she could make it happen, then okay. CBC ended up giving the money for it!”