Lifestyle
Home Life Lifestyle The Best Moments From the 2020 Emmys 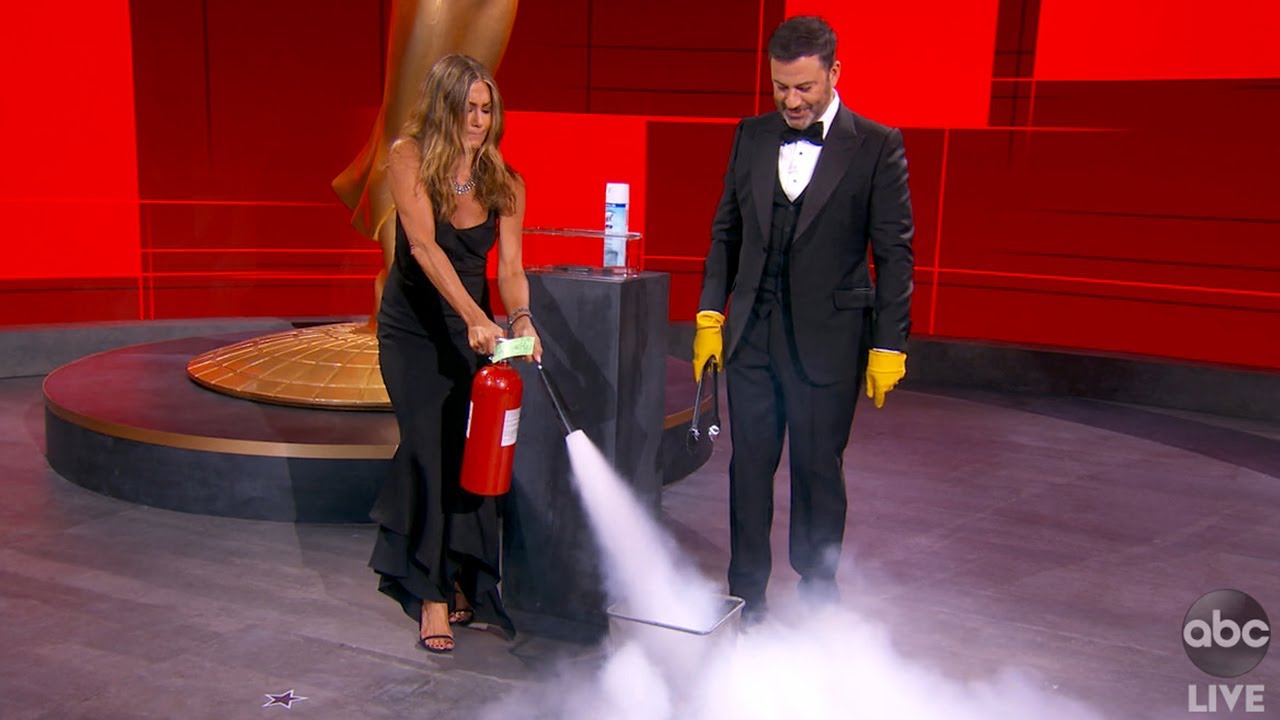 Handball rule tracker - how many penalties have been given in 2020/21?

DAZN to Launch in over 200 Territories from December 1

Teofimo Lopez should give Vasyl Lomachenko a rematch

The longest fight in boxing history

On This Day: A cruel point deduction costs Lloyd Honeyghan against Jorge Vaca

Yes Christian Coleman is a clean athlete, but is his reputation after missed doping tests?

The 2020 Emmys were definitely one for the books. To discourage large gatherings, the Television Academy rolled out an elaborate virtual ceremony, with nominees in 20 different cities tuning in to the live event via video feeds set up in their homes. But despite the physical distancing (and different time zones), the “Pandemmys” went down as a historic night to remember. Read on for some of the highlights and best moments from the 2020 Emmys.

Jimmy Kimmel enlisted some heroes to help with the ceremony
While there were some Hollywood A-listers on hand to introduce or present awards (like Sterling K Brown, Laverne Cox and Jennifer Aniston, who literally put out a fire on stage while presenting the first super-sanitized prize of the evening), the real stars of the evening were frontline workers. Several essential service workers who’ve been working tirelessly throughout the pandemic—from school teachers to UPS workers to doctors—tuned in to the ceremony virtually to hand out awards to “those who are much less essential than they are.”

Schitt’s Creek swept the Comedy category
Making history as the only show to ever win all four of the acting awards in the Comedy category and breaking the record of the most wins by any comedy show in a single year, Schitt’s Creek went out with a bang in its final season. The show’s four leads—Catherine O’Hara, Eugene Levy, Dan Levy and former FASHION cover star Annie Murphy—all gave emotional, impassioned speeches about the power of love and kindness, with the younger Levy also encouraging viewers to vote because “that is the only way we are going to have some love and acceptance out there.”

Huge, huge, massive, enormous congratulations to the entire cast and crew of Schitt’s Creek for winning the Outstanding Comedy Series #Emmy! Wishing everyone could have been together tonight to celebrate 🤍🖤💛

Zendaya became the youngest person to win Best Actress in a Drama
For her role as Rue on HBO’s Euphoria, Zendaya took home the prize for Best Actress in a drama series, beating out industry veterans like Jennifer Aniston and Sandra Oh to become the youngest-ever winner at 24. The actress (and former FASHION cover star) accepted the award surrounded by her friends and family, and wearing a Giorgio Armani Privé gown. “I know this feels like a really weird time to be celebrating, but I just want to say that there is hope in the young people out there,” she said. “I know that our TV show doesn’t always feel like a great example of that but there is hope in the young people. And I just want to say to all my peers out there doing the work in the streets, I see you, I admire you, I thank you.”

There was a mini Friends reunion
Up for an Emmy for her work on Apple TV’s The Morning Show, Jennifer Aniston took viewers into her home where she was getting ready for the evening with none other than Courteney Cox and Lisa Kudrow. “We live together… We’ve been roommates since 1994, Jimmy,” Aniston reminded Kimmel. “Where else would I live?” quipped Kudrow.

Regina King took home her fourth Emmy
Regina King accepted an Emmy award for Outstanding Actress in a Limited Series last night for her role as Sister Night on the acclaimed HBO series Watchmen. This prize marks her fourth Emmy award, which means she is tied with only Alfre Woodard for the most Emmy wins ever for a Black performer. Wearing a Breonna Taylor t-shirt under a hot pink suit, the actress said, “Gotta vote. I would be remiss not to mention that, being a part of a show as prescient as Watchmen.” She also took a moment to shout out the late Justice Ruth Bader Ginsburg, saying “Rest in power, RBG.”

Ramy Youssef showed viewers what it’s like to lose an Emmy in 2020
With nominees spread out across various cities either in their homes or at mini gatherings in their hometown, Emmy presenters were tasked with appearing at each nominee’s home dressed in a hazmat suit, ready to hand out the statuette in case they won. Those who didn’t win had to watch the presenter turn and walk away. In one of the best moments of the 2020 Emmys, Ramy Youssef—who was nominated as both actor and director for his show Ramy—captured the moment when a hazmat-suited presenter waved and walked away from his house.

when you lose the emmy pic.twitter.com/ECkbGcoHBA

Celebs shared a peek of what they’ve been up to during quarantine
“Many of us have been cooped up at home for months now,” said Kimmel. “So we asked some of our favourite TV stars what they’ve been up to since everything went to hell.” Cut to clips of Mindy Kaling (who’s been doing embroidery), Bob Odenkirk (“I’ve been living inside my garden shed to avoid my family”), Tatiana Maslany (who’s been making wine in her bathroom toilet) and more.

The post The Best Moments From the 2020 Emmys appeared first on FASHION Magazine.