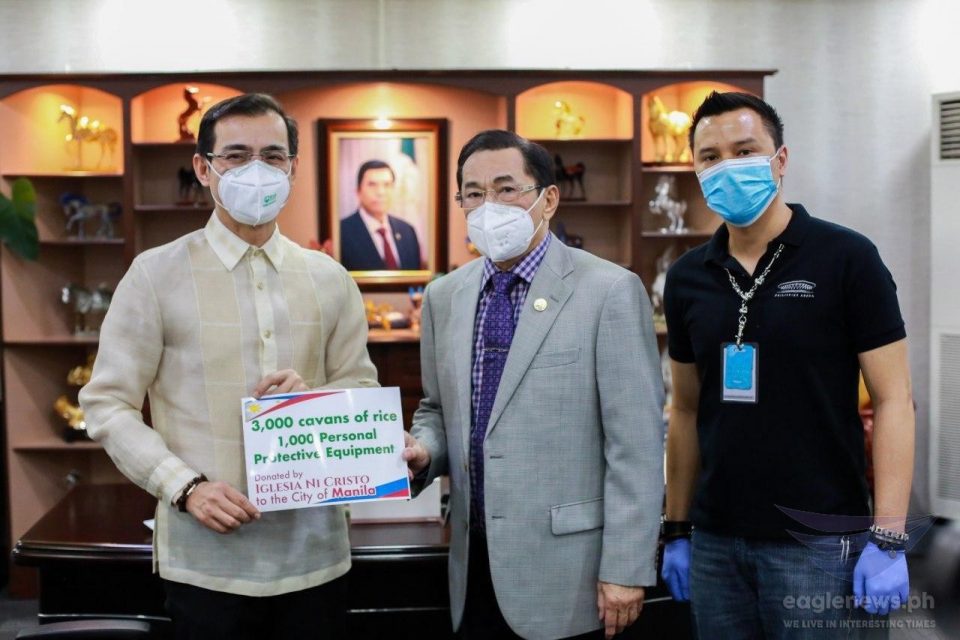 Caring for the World
Philippines
May 8, 2020
Under One Ceiling 0

May 8, 2020
Under One Ceiling
The Iglesia Ni Cristo (Church Of Christ) donated 3,000 sacks of rice and at least 1,000 pieces of personal protective equipment (PPE) to the Manila City government as part of its continuing efforts to help people amid the COVID-19 pandemic.

He thanked INC Executive Minister Brother Eduardo V. Manalo for the help provided by the INC.

Moreno said that he had recently written a letter addressed to the INC Executive Minister seeking help for the city’s frontline workers, and was very thankful for the INC’s fast response.

He said that he received a response less than 24 hours after he had sent a letter to the INC Executive Minister.

He said he had only asked for PPEs, but was surprised that the INC had also given 3,000 sacks of rice for Manila’s poor residents.

INC General Auditor Brother Santos said that this help extended by the INC Church Administration is part of the Church’s efforts to help the country’s front liners, as well as those in need at this time of the COVID-19 pandemic.

He said that the INC’s efforts to help their fellowmen, and not just the INC members, are being done in the Philippines as well as outside the country, which is in accordance to God’s teachings as written in the Bible to help those in need, wherever they may be.

He said that the INC Executive Minister’s directive to help people, both the brethren and non-INC members, show the Church’s true love and concern for their fellowmen.

The sacks of rice were delivered by several trucks to the Manila City government on Friday afternoon. The PPEs were also promptly sent to the city government for Manila’s frontliners.

INC helping those in need amid COVID-19 pandemic

Recently, the INC had also recently given assistance to the Metro Manila Development Authority’s Malasakit Movement, and the National Kidney and Transplant Institute, giving them essential PPEs for its frontline workers.

The INC gave 1,000 sets of PPEs and 500 sacks of rice to the MMDA frontliners through the Malasakit Movement headed by MMDA Spokesperson Celine Pielago on May 6.

Earlier, on April 24, the INC also donated P2 million worth of PPEs and other hospital needs to the NKTI which had also sought the INC’s assistance.

The INC had also given at least P13.2 million worth of PPEs and medical supplies to Quezon City hospitals and front liners on April 4.

0
11   0
previous Health Secretary Duque calls for suspension of hike in OFWs’ PhilHealth premium contributions
next Palace says “low-risk” areas where quarantine had been supposedly lifted, to be under “modified GCQ”

Chile's Constitutional Assembly presented President Gabriel Boric with a historic proposal for a new constitution for the South American country on Monday. [...]

Brazil sees record Amazon deforestation in first half of 2022

Brazil's Amazon rainforest has been deforested by a record amount in the first half of 2022, according to the country's Space Research Institute (INPE). [...]

The United States has determined that gunfire from the Israeli military was "likely responsible" for the killing of Al Jazeera correspondent and Palestinian-American Shireen Abu Akleh in May, although an examination overseen by the US of the bullet "could not reach a definitive conclusion" on its origin due to the condition of the bullet, State Department spokesperson Ned Price said in a statement Monday. [...]