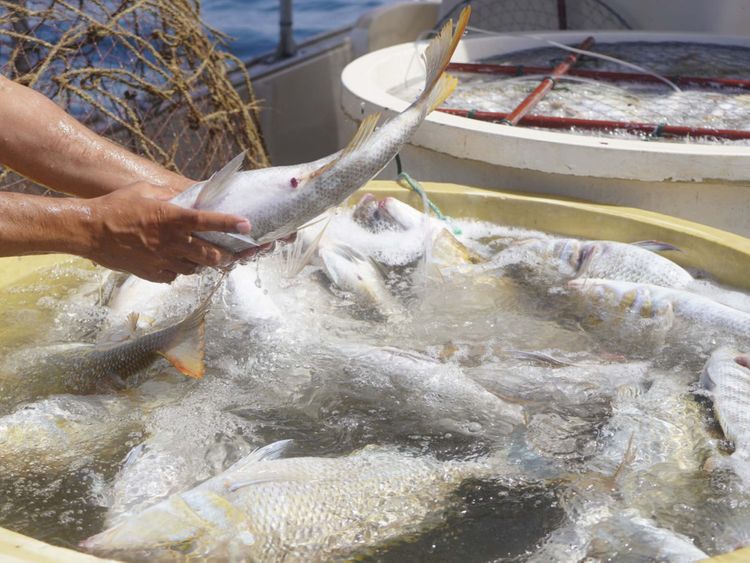 June 26, 2020
Under One Ceiling
Afish farm in Jebel Ali is planning to increase its production of organic, locally-farmed Atlantic salmon to cover the entire demand for the second most eaten fish in the UAE, after hammour.

This was revealed by Bader bin Mubarak, CEO of Fish Farm LLC, to Gulf News following the visit by His Highness Sheikh Mohammed bin Rashid Al Maktoum, Vice President and Prime Minister of the UAE and Ruler of Dubai, at the aquatic farm on Tuesday. Sheikh Hamdan Bin Mohammad Bin Rashid Al Maktoum, Dubai Crown Prince and Chairman of Dubai Executive Council, was also present during the visit.

Sheikh Mohammed said expanding domestic food production to achieve self-sufficiency is a strategic objective and one of the main pillars of the National Food Security Strategy.

“Food is a strategic commodity and we look to young Emiratis to propose new ideas and projects to help further enhance food production. We have a clear strategy and sufficient resources to achieve our objectives. We are confident that we can generate practical solutions to achieve self-sufficiency,” he underlined.

Sheikh Mohammed added the UAE did not witness any shortage in food supply despite the exceptional situation created by coronavirus outbreak. He noted it showed the strength and resilience of the national food security strategies and capability to respond to the needs of the community.

During the visit, bin Mubarak briefed Sheikh Mohammed and his accompanying delegation on the strategy of the farm and its future expansion plans, particularly in the area of cold-water fish, aimed at reducing imports and securing sustainable supplies to local markets.

Fish Farm has three facilities across the UAE, including a hatchery in Umm Al Quwain and cage farms in Dibba, Fujairah. The main facility in Jebel Ali can produce around 3,000 metric tons of organic fish per year, including salmon, sea bass, sea bream and hammour for local consumption.

Bin Mubarak told Gulf News, Fish Farm ranks number four in the world in terms of producing organic salmon. It is also the only salmon breeding system in the world with full environment control.

Fish Farm mimics the natural life cycle of salmon which is found mainly in cold water such as Antarctica, Alaska, Norway, the North Sea and Scotland.

Salmon eggs are sourced from Scotland and hatched in Umm Al Quwain before being transferred to the Jebel Ali facility. Bin Mubarak said it would take at least two years to have a full-grown salmon ready for consumption that weighs between 3-4 kg each.

He noted the price of the salmon they produce cannot be compared to commercially imported fish. “Our salmon is 100 per cent organic, unlike commercial fish which are given artificial feeds,” he noted.

“Moreover, our fish are fresh as it would take only a couple of hours to reach the market or be on the table, unlike commercial fish which takes at least three to four days before reaching the stalls,” bin Mubarak underlined.

The UAE is putting a premium on the importance of producing food at home to boost the country’s economic and environmental sustainability. Recently, Gulf News reported that the UAE is using innovative methods to cultivate food crops on a large scale.

Speaking to Gulf News, Halima Al Jasmi, head of the Fisheries Section at the Ministry of Climate Change and Environment (MoCCAE), said the UAE is also boosting its aquatic resources.

“We are working to boost fish production through national programmes and initiatives, such as cultivation of coral reefs and mangroves, installing artificial caves, specifying permitted fishing zones and equipment, imposing seasonal fishing ban on several species during their spawning seasons and permanent ban on endangered species, as well as designating 16 marine protected areas that account for 12 per cent of our marine and coastal territory.”

In particular, Al Jasmi said some of the innovative fish cultivation methods include the use of Recirculating Aquaculture System (RAS) and aquaponics

RAS is a closed water treatment system in a controlled environment. Its main advantage the reduction of water use as water can be reused after treatment. Aquaponics, on the other hand, is combining aquaculture with hydroponics (soil-less planting).

To boost fishing this summer and to mitigate the impact of COVID-19 on food supply, Al Jasmi noted has eased the restrictions on fishing trip and facilitated the remote selling of fish.

MoCCAE has lifted the annual fishing and trade ban on Arabian safi (rabbitfish), sheri (emperor), and sharks from April 5 and introduced apps targeting fishermen to boost local fishing that range between 78,000 – 79,000 tons of catch annually.