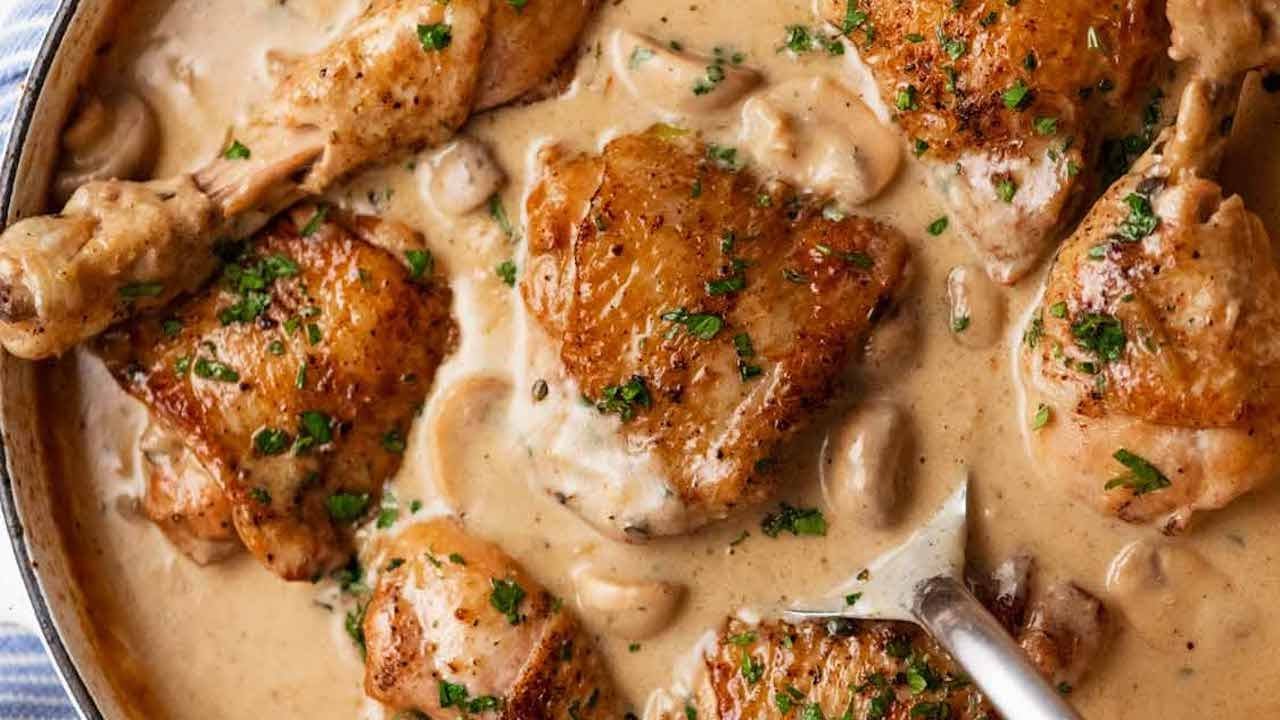 International Cooking and Recipes
September 23, 2021
Under One Ceiling 0

Chicken Fricassée is a traditional French chicken stew made with browned chicken pieces braised in a creamy white mushroom sauce. A rustic family-style meal that’s easy enough for midweek, it’s a bit like a white sauce version of Coq au Vin – except it’s so much faster to make!

Pronounced “fri-ka-say”, this is a terrific recipe to get a cosy stew fix any night of the week without hours of slow cooking. This dish is a traditional French chicken stew made with a creamy white sauce with mushrooms, instead of the more common rich, dark brown sauce like you ordinarily see with stews, such as with Coq au Vin and this baked Chicken Stew.

I’m just going to tell it to you straight: the chicken is lovely (juicy, golden brown, etc etc) … but this dish is all about the creamy white sauce!!!

Here’s what you need to make Chicken Fricassée.

This dish is best made with skin-on, bone-in chicken pieces that stay nice and juicy after simmering in the sauce. Mind you, this is a quick stew that only calls for 30 minutes of simmering time. But still, boneless breast or thigh would overcook in this time. Having said that, I’ve included in notes in the recipe for how I would make Chicken Fricassée with breast and boneless thighs, because I know some of you will ask!!

2. Other ingredients in Chicken Fricassée

Here are the other ingredients required for Chicken Fricassée:

How to make Chicken Fricassée

In a nutshell, Chicken Fricassée is made by browning chicken pieces in butter, then braising them in a creamy mushroom sauce thickened with a little flour. It’s a quick stew so it’s only simmered for 30 minutes on the stove which is all you need for the chicken to cook through.

Matters of serving and eating!

How to serve Chicken Fricassée

Chicken Fricassée can be served directly in individual servings. Otherwise, serve it family-style by placing either the cooking vessel on the table or transfer the Chicken Fricassée to a large serving bowl so people can help themselves.

As for what to serve with Chicken Fricassée, any sauce this good demands a starchy partner! Mashed potato is traditional (Cauliflower Mash for those going low-carb) though I was interested to learn that rice is not unheard of either.

Short pastas like macaroni, penne and ziti would also be ideal. Basically anything that let’s you enjoy every drop of that gorgeous creamy mushroom sauce!!

We’re a little light on the vegetables in Chicken Fricassée! So round off your meal with a nice side of greens. Try a big bowl of roasted vegetables, Garlic Sautéed Spinach, a fresh French Bistro Salad, Roasted Asparagus or a big bowl of leafy greens tossed with a French Vinaigrette.

If you try this Chicken Fricassée, share below in the comments what you served it with. People want to know!

Recipe video above. A traditional French dish, this is essentially a quick chicken stew with a creamy white mushroom sauce. It’s a bit like a white sauce version of the famous French Coq au Vin – but it’s much faster to make!

This is a wonderful rustic family meal that’s quick enough for midweek, or to elevate to restaurant level by using homemade chicken stock.

1. Chicken – Needs to be skin on, bone in pieces so they don’t overcook and dry out. If you are dead set on making this with boneless breast, brown it per recipe, simmer sauce with lid off for 15 minutes (to reduce), then add breast and simmer with lid on for 6 minutes or until internal temperature reaches 65°C/149°F. For boneless thigh, do the same except the internal temperature should be 75°C/167°F.

2. Wine – Any dry white wine will work great here, though chardonnay is particularly good because it adds good flavour. Don’t use anything too sweet or too woody.

Ordinarily I hose him down with the garden hose after his beach session. But it was bitterly cold on this particular morning, so I took pity on him. #sucker (that’s me I’m referring to!).