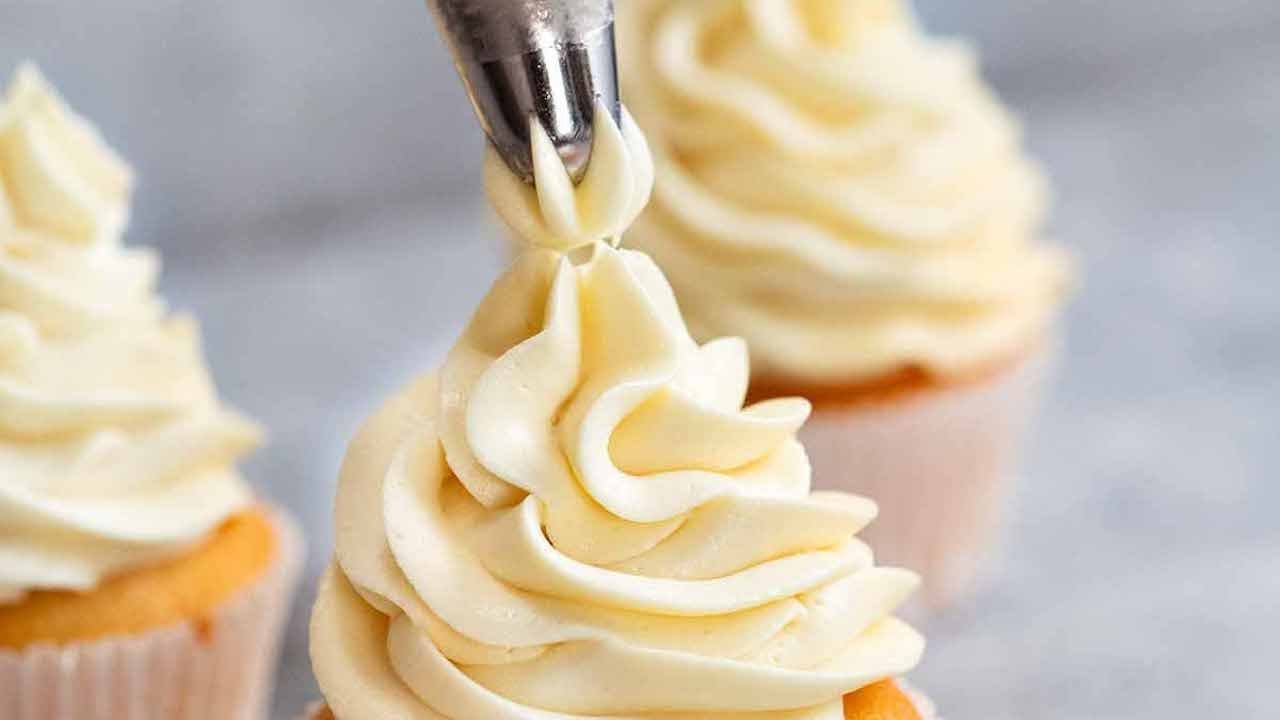 International Cooking and Recipes
September 12, 2020
Under One Ceiling 0

Unlike traditional buttercream, this Fluffy Vanilla Frosting is silky smooth, much fluffier and far less sweet. The texture is slightly denser than whipped cream, but unlike whipped cream that deflates within hours, this Frosting is stable for days. It pipes like a dream, and is straightforward to make.

It’s actually an old fashioned frosting called “Ermine Frosting”. If you’ve never heard of it before, the ingredients and method will intrigue you!

I call this my “secret” Vanilla Frosting because it’s not a widely known type of frosting and people are always flabbergasted when I tell them how it’s made. It’s my best all-rounder that’s a hit with everyone. Take a classic buttercream, in all its rich, sweet glory, and a lightly sweetened whipped cream, and this Vanilla Frosting sits squarely in the middle.

Unlike buttercream, it’s 100% silky smooth. It pipes like a dream into tall swirls, roses, or anything your heart desires. And unlike whipped cream which deflates within hours, this Vanilla Frosting will hold its piped shape for days and days.

This looks and pipes like buttercream, but it’s WAY less sweet and rich!

This frosting is actually an old fashioned frosting called Ermine Frosting. Also known as boiled-milk frosting and roux frosting, none of these names sound particularly flash nor do they capture the magic of this frosting that has a cult following that some declare is the best frosting in the world!

About this Fluffy Vanilla Frosting

Though the proper name of this frosting is Ermine Frosting, I’m going to continue to call it Fluffy Vanilla Frosting because that’s exactly what it is – and it sounds a lot more flattering than the real name!

The method by which it is made will sound highly unusual: hot milk and sugar is thickened into a thick custard texture which is then cooled into a thoroughly unappetising looking bowl of gluey-jelly which is then whipped into butter.

And this is when the ugly duckling transforms into a beautiful swan. Because suddenly, you’re staring into a bowl of what looks like whipped cream. Except.. you haven’t used cream at all. You touch it and know that it’s firm enough to pipe into sky-high swirls. You taste it, and it’s silky smooth. A cross between buttercream and whipped cream!

What you need for this Fluffy Vanilla Frosting

All you need is butter, flour, milk, sugar and vanilla. Flour?? I hear you query. YES. That is what thickens this into a frosting texture. I promise you will not detect even the faintest bit of flour once finished – not in texture and certainly not taste.

How to make my secret Less-Sweet Fluffy Vanilla Frosting

Here’s how it’s made:

How to use this Fluffy Vanilla Frosting

Spread it onto cakes (like in this Vanilla Cake) and cupcakes (like these). Or transfer to a piping bag and pipe sky-high swirls.

Treat it like your everyday buttercream – this frosting can be tinted and flavoured with concentrated flavouring. Note: I haven’t tried using fresh citrus like lemon, lime and orange to ensure it doesn’t split.

The butter in this frosting is that requires refrigeration, but only if it’s warm enough for the butter to start softening too much while causes the frosting to droop. I find that up to about 23°/73°F, this frosting is fine out on the counter.

If you are forced to refrigerate, make sure you take cupcakes out 30 minutes prior to serving to bring to room temperature. Nobody likes cold cupcakes!

So, now you know my secret frosting recipe.

I’ve been making it for years, relishing in how people who ordinarily shy-away from sky high mounds of frosting have dived into it after I assured them that it’s way less sweet and rich than typical frostings.

Tell me what you think if you try it! – Nagi x

Recipe video above. This is actually an old fashioned frosting called Ermine Frosting that I think is a hidden gem – let’s keep it a secret between us! It is less sweet and lighter in texture than buttercream, it’s 100% silky smooth and pipes like a dream. It’s got a texture like whipped cream but slightly more dense – the texture is similar to Swiss Meringue Buttercream. But unlike whipped cream, this doesn’t deflate in the fridge, it will hold it’s shape for days!

Don’t be turned off by the flour – you absolutely cannot taste it at all.

Makes enough to frost 12 cupcakes generously with tall swirls (pictured), or 24 cupcakes swirled on with a knife, or a two or three layer 20 – 23cm/8-9″ cake.

1. Sugar – caster/superfine ok too. 1 cup sugar yields a sweet frosting but not overly sweet like buttercream which uses about 2.5 – 3 cups equivalent. Can reduce to as little as 1/2 cup – then this really does taste like a lightly sweetened whipped cream!

2. Frosting colour – it will depend on the colour of your butter. Economical butter tends to be more yellow so the frosting will have an off white colour. European butters are paler so will yield a near pure white frosting. The butter whipping stage will lighten the colour of the butter.

When he literally DIVES in to inhale a cupcake and gets a big splodge of frosting on his nose that is JUST out of licking range….