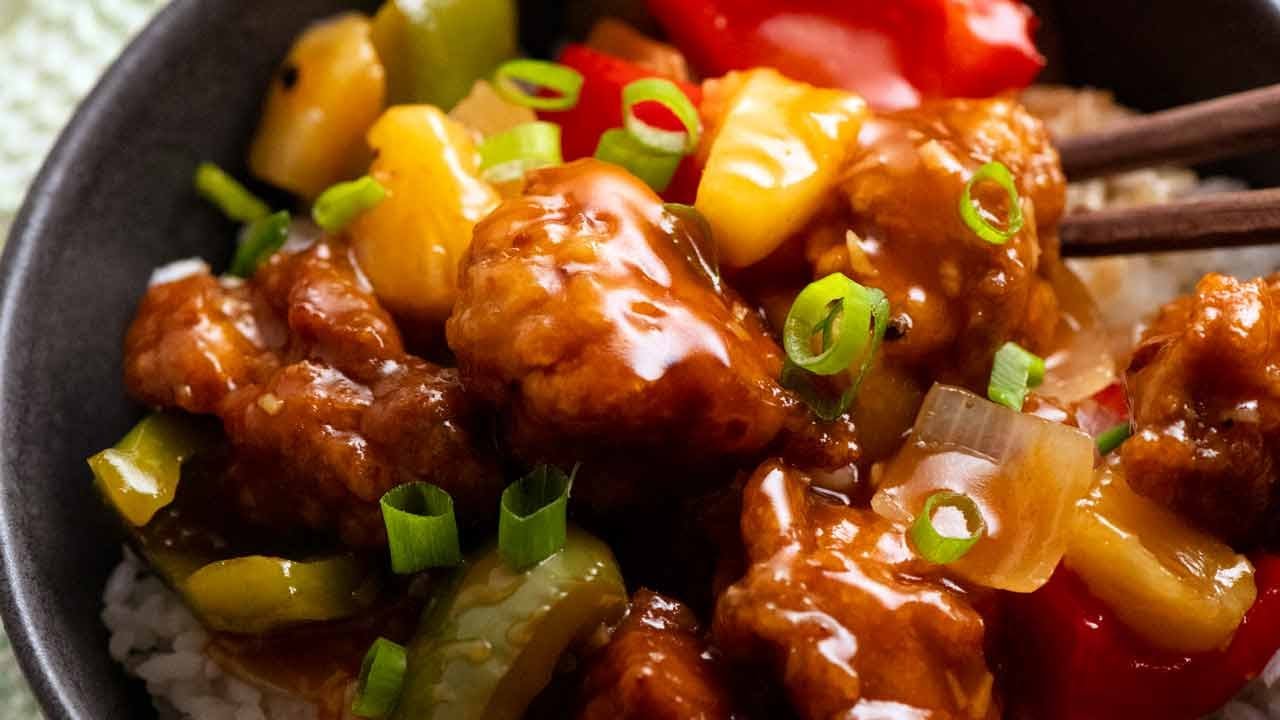 International Cooking and Recipes
August 15, 2020
Under One Ceiling 0

The best ever Sweet and Sour Pork recipe is loaded with tricks the Chinese have been using for centuries: double dredge and double fry for extra crispy, cornflour instead of flour, economical pork used for juiciness, but tenderised with baking soda so you’d swear they’re pricey chops, and a sauce that’s not sickeningly sweet. BONUS: oven baked Sweet and Sour Pork directions included!

There’s a lot of information in this Sweet & Sour Pork recipe, so I’m going to skip all the usual attempts at a charming story and just give you the high points!

Wait a sec – did I just convince you that you’ve gotta try this?!

How to make Sweet and Sour Pork – OVERVIEW

Here’s what you need for the pork and marinade:

The more economical the pork cut, the longer the marinade time.

In order of preference:

Any generic “pork steaks” would fall under #4 or #5 assuming it’s intended for quick cooking.

Here’s what goes in Sweet and Sour Sauce. It gets the red colour from ketchup – food colouring not required!!

You’ll notice that my sauce is not quite the crazy red you get at restaurants. That’s because I choose not to use food colouring!

Ingredients in the Stir Fry

And here’s what goes in the Sweet and Sour Pork Stir Fry. I know some people are big advocates of fresh pineapple. I never use fresh – because they’re in season in summer and I (typically) don’t deep fry in summer!

I know we all aspire to it, but the fact is that the pork in Sweet and Sour Pork doesn’t stay crispy for long once coated in sauce – even at restaurants. The pork IS crispy without sauce, but once coated, it stays pretty crispy for around maybe 5 minutes, then after that you’re left with the coating the sauce clings to but it’s not as crispy anymore.

This is the case even with restaurants, unless they use a different type of batter (like the puffy batter for Honey Chicken which truly stays crispy – recipe coming next week) or they use speciality ingredients like Xanthum gum.

Want to avoid deep frying? The BEST oven baked sweet & sour pork is in the recipe too!

So now that’s out of the way, the steps below show how to make the crispiest pork for Sweet & Sour Pork:

Here’s a comparison of how the pork looks after Fry #1 and Fry #2. Added bonus: the higher temp makes the pork less oily too.

How to make Sweet and Sour Pork

We’re on the home stretch! Here’s how it comes together:

KEY TIP: Toss the pork QUICKLY in the sauce – aim for 10 seconds – to prolong its crispy life!

Serve with plain rice or Fried Rice if you want to go all out. And if you’re making the effort to make Sweet and Sour Pork at home, why wouldn’t you?? (Tip: Fried rice reheats 100% perfectly, so make it first then just reheat it).

For extra vegetables, add a side of Chinese Broccoli with Oyster Sauce (a restaurant favourite!), or for fresh options, try Smashed Cucumbers, this Asian Salad or Asian Slaw.

And lastly, because I know someone’s going to ask, and for all those times you’re desperate for a Sweet & Sour Pork fix but can’t face the oil….oven directions are included.

Is it as good as deep fried? Of course not – and anyone who tells you otherwise is outright lying. I’ve tried it every which way I can, and I can’t replicate it exactly.

But you can get   80% of the way there, and once it’s all mixed up with the sauce you won’t really notice anyway. But your hips will thank you for it! – Nagi x

Recipe video above. The best ever Sweet and Sour Pork recipe is loaded with tricks the Chinese have been using for centuries: double dredgeand double fry for extra crispy, cornflour instead of flour, economical pork used for juiciness, but tenderised with baking soda so you’d swear they’re pricey chops, and a sauce that’s not sickeningly sweet.

Don’t let the list of ingredients daunt you. There’s a lot of repeat ingredients!

OVEN option provided in notes. Because sometimes, you just have to….

1. Pork – pork scotch (aka pork neck / collar butt) and pork shoulder/butt are recommended for best flavour and juiciest pork pieces. Usually requires slow cooking to make them tender – the baking soda and cornflour in the marinade is a Chinese tenderising secret – also see how to tenderise Chicken and Beef. This juicy cut means we can cook for a bit longer to get the outside super crispy without the inside becoming dry and tough.

Other pork cuts can be used but because they are leaner, are more prone to drying out due to overcooking before the outside of the pork gets crispy – though the marinade helps counteract this. General rule: the more tender/expensive the pork, less minimum marinating time required:

2. Finely grated – for best flavour, use a microplane so it’s grated really finely and becomes wet and “juicy”

4. Pineapple – I like to use canned so I can use the juice in the Sauce which adds extra flavour. If you prefer to use fresh pineapple, just use more water instead (don’t worry, the Sweet & Sour Sauce has plenty of flavour already!)

And here’s homemade Vegetarian Oyster Sauce recipe by Omnivore’s Cookbook, a Chinese recipe blog. I was extremely impressed with it.

6. Best baking method – I tried a bunch of ways, and this is the method that yields the best results. Not quite as crispy as deep frying, but certainly crispy enough for a very respectable Sweet & Sour Pork. The brief pan fry is key here to seal in some crispiness – without this step, the coating is just kind of powdery, not crispy at all.

7. Air fryer? Haven’t tried, would love to know if anyone does. I would spray pork pieces with oil then air fry. I see no reason why it wouldn’t work.

8. Recipe source: terrific teachings from watching various Chinese YouTube channels but notably this recipe from Pups with Chopsticks for the double dredge method. She recommends potato starch – once adapted to my recipe, I really didn’t notice a difference with cornflour so I stuck with that.

Paired with my Sweet and Sour Sauce (from this recipe and this one) though slightly amended to make it less rich (given we are frying here) and the tenderising method & times based on much experimenting done at RTE HQ!

He takes his job as Chief Taste Tester of RecipeTin Eats very seriously. That look of concentration on his face would put any exam-sitting student to shame!