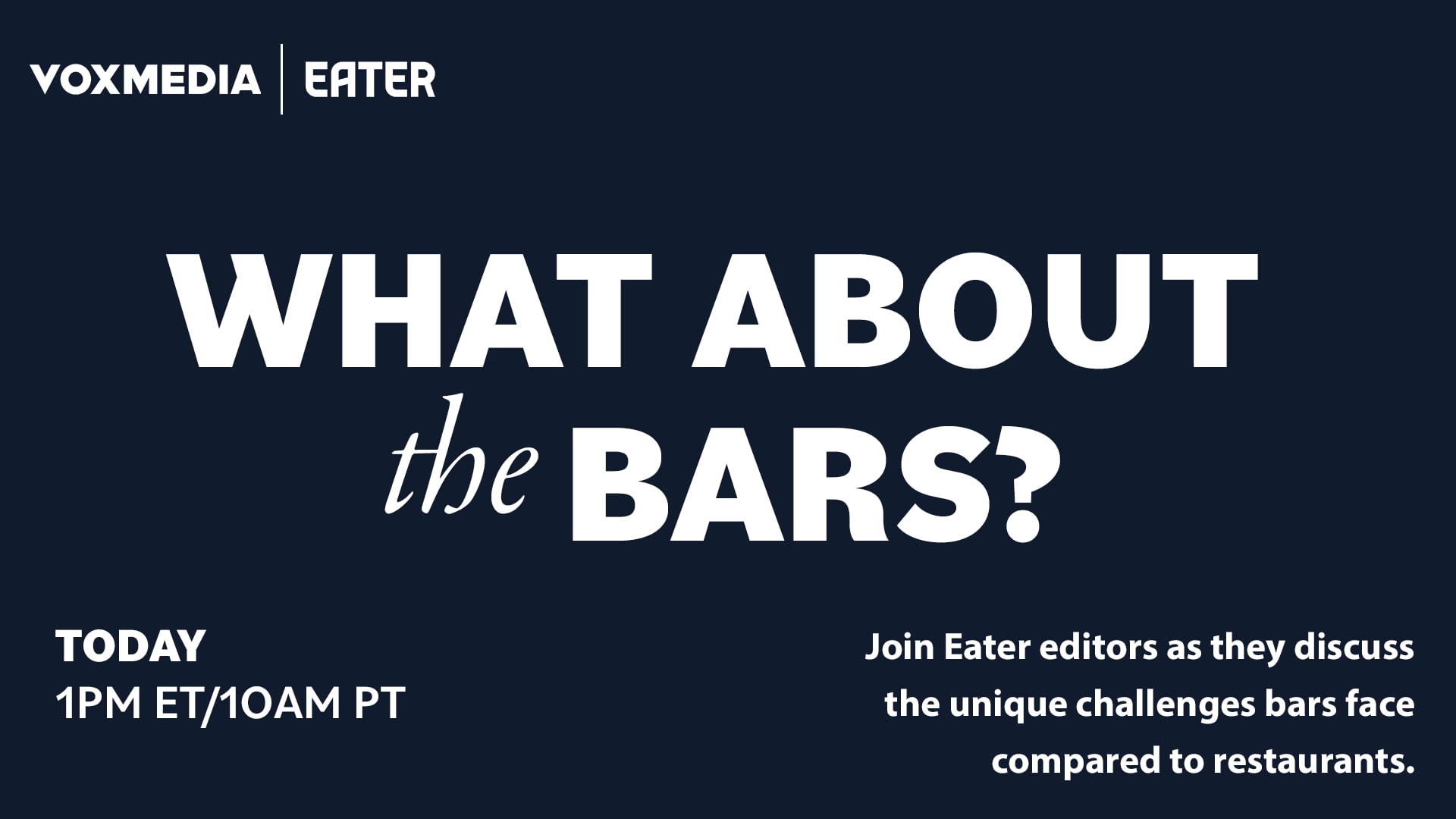 International Cooking and Recipes
August 26, 2020
Under One Ceiling 0

Regulations around capacity, food, and to-go cocktails are just a few of the bar industry’s challenges

When the novel coronavirus picked up steam in March and blew through every industry imaginable, restaurants were a very visible victim: Dining rooms were forced to close, takeout became the new norm, and the ripple effects across the food chain were immediate.

But bars were also impacted immediately too — and without a ready pivot in sight. From the dive bars to the upscale cocktail lounges, owners and bartenders have gotten creative; but their challenges, as they navigate changing consumer habits, ever-shifting liquor laws, and reopening guidelines that differ vastly from restaurants’, have been acute.

Beth McKibben of Eater Atlanta, Eve Batey of Eater San Francisco, and Ashok Selvam of Eater Chicago came together for our Eater Talks event series, to discuss the state of bars and drinking in the U.S. right now. Below are lightly edited excerpts from their conversation, moderated by Eater staff writer Jaya Saxena, as well as a full video recording of the talk.

Eve Batey, editor of Eater San Francisco: “The Newsom administration in California says that bars provide particular threats, and those threats are also inherent to bar culture and what we love about bars — which is that you hang out and you talk to people. That when you drink, you speak more loudly — which I think we have all experienced — and then when people get loud, you get louder and everyone gets louder, and the louder you speak, the more droplets you’re sending out so the more everyone is bring exposed. And anyone who’s been to college who’s made a bad sexual decision knows that alcohol lowers your inhibitions and you’re less likely to wear masks.”

Certain regulations and legislation can help bars adapt to survive the pandemic.

Ashok Selvam, editor of Eater Chicago: “Before this whole pandemic, Chicago bars weren’t allowed to set up on sidewalk patios… so that’s some emergency relief.”

Beth McKibben, editor of Eater Atlanta: “Right now, the city of Atlanta has a temporary order in place that allows restaurants and bars to allow to-go beer and wine, but that does not include cocktails. It hasn’t stopped restaurants and bars from doing that, but I also think the city is just kind of looking the other way regarding that, because they know this industry has been hit so hard that they’re not going to try and police that.

We also just had a bill that was passed in the General Assembly and the governor just signed it, but it was actually in the works prior to the pandemic, that’s going to eventually allow restaurants, bars, certain convenience stores, liquor stores, grocery stores to deliver beer, wine, and liquor to homes. So that will be a big boost for the restaurant and bar industry, because they’ll be able to deliver those things without concern.”

… but other regulations (or lack thereof) seem to be making it difficult.

Batey: “In California, the Alcohol Beverage Control, or the ABC, has a lot of rules that are very difficult to understand, very difficult to parse. I’ll use the example of the food issue, of ‘bona fide food’ [the term used by the ABC]. It’s this vague thing — what constitutes a real meal? Before this panel, Jaya was mentioning that there’s a bar she goes [in NYC] that will give you popcorn with your [drink]. Well you know what, I had popcorn for dinner last night — it’s a real meal! But according to the ABC, it’s not, probably.”

Selvam: “The food component is a particularly troublesome one in Chicago, because lawmakers over the decades have done their best to dismantle food truck culture, because a lot of restaurant owners or lobbyists had powerful clout positions and saw food trucks as a threat. So they’d be natural partners with bars that do not have kitchens to have a food partner, [but they aren’t there].

During this pandemic, lawmakers have been particularly flat-footed. To-go cocktails — they’ve been lobbying for this since March, and it took local government and state government until June to approve them, and they touted it as a lifeline to really help bars. But that’s a couple months of profits down the drain…

Similarly, permitting is so slow to secure a patio — and who’s going to advocate for you?

All of this just adds up; you can’t just look at the surface, you gotta look at the roots. In Chicago, for example, it’s illegal to have infusions in liquor, for some health code reason. Imagine if a bar could sell their version of, say, maple syrup-infused bourbon, or anything with fruit, for example. That’s something they could make a profit on. We had cocktail kits before, which sold the individual components like a bottle of liquor and mixtures, to create a cocktail. Well, compare that to an actual cocktail — I think the profit margins is like five times more than with a to-go drink. All these mechanisms were never in place, and it’s just sort of been a dismissal of something that’s really important cultural-wise.”

Are bars being unfairly targeted when it comes to regulations?

Batey: “Many bar owners that I’ve spoken to have said, ‘San Francisco is being particularly conservative when it comes to bars,’ or ‘Our health officer is retweeting things from anti-liquor groups’ and things like that. And I am very sympathetic to that. But at the same time, I will tell you that if you spoke to people who own gyms or people who own hair salons or people who own tattoo shops, they are also saying they’re singled out.”

Selvam: “Bars traditionally have been villainized. We can talk about Prohibition, we can talk about the Temperance movement. You mention the health clubs and how you feel like they’re being singled out — but there’s not that same history as with bars, as sinister spaces where [people] are up to no good. It kind of ignores the whole ‘third place’ mentality: Bars can be safe spaces if they have the right leadership, if they have the right ownership. It’s important to know that not all owners are created equal, not all bars are the same; the dive bar, the cocktail bar, the spring break bacchanalia — they’re going to have all different standards, you go there for different reasons and they’re going to have different responsibilities.

I think the food requirement is… a barrier to prevent more bars from opening, because finding the connections — the food trucks, finding the restaurant down the street — that takes time. It’s not easy just to call someone up. So there are fewer bars that have the capacity, the actual ability, to do that on short notice.”

McKibben: “Atlanta is a different situation, since we’ve always had bars and food together. That’s just how it’s been down here…. But what has really been striking is the identity crisis that the Atlanta bar scene is going through right now, that food has become such an important factor in surviving. Because they can’t do takeout cocktails legally here, and that’s what the bars are known for: cocktails, and the creativity that comes with that. That’s why people go and you sit and you have a drink and chill out and talk with your friends — and that’s just not happening here anymore. So food has become an absolute necessity. It’s an identity crisis: ‘Am I a bar or a restaurant? What am I?’ They don’t know.”

Selvam: “I don’t think anyone who is sane is arguing that bars shouldn’t be closed — because you linger more at a bar, you’re much more inclined to ignore social distancing rules. That’s not really an argument. But the ‘fairness’ is: Why weren’t we prepared? And why are we still continuing to take our time on things that that could be of assistance to the bar industry?”

Ultimately, regulations and relief that help bars stay closed may be the most helpful.

McKibben: “I asked one bar owner this weekend how do they feel about young people coming in, that may be coming in a group of 5 or 6 people, and they’re inebriated already from hopping down the BeltLine, which is our pedestrian trail in Atlanta. And he said, ‘It’s terrifying. A lot of them are coming in, they’re not wearing masks at all, and even though we’re telling them to wear a mask, they’re just not doing it. And so my staff is scared, I’m scared, patrons in the bar are scared. So we’ve had people leave since they don’t want to be around those folks.’”

Batey: “There isn’t a ‘fair’ here. Everyone can get infected. So I understand why regulators are saying, ‘This is the line we’re drawing on what is reopening right now.’ And it breaks my heart, because I love bars and I love gyms, and my friends own gyms and they might lose everything, and my friends own bars and they may lose everything… But I also think that we can’t say, ‘Well these guys get to be open and these guys don’t, so we should be open and we should all be open,”’ because then we’re all gonna die.

So how do we make that work? The only solution is that we have specific legislation that supports bars and supports businesses that aren’t being allowed to reopen now. Are we going to get that? I don’t know. Does the state of California have that money? We’re just trying to make sure that people who unemployed have that money.

But what we’re really talking about with ‘fair’ is making sure the banks play ball to take care of landlords, so landlords can play ball and take care of bars, and at the federal level and the local level, we find ways to specifically support these businesses. So we don’t have to worry about ‘fair’ and who can open and who can’t, so we aren’t making people go out and work and feed me a cocktail while I’m sitting there and I infect them and everybody dies.”