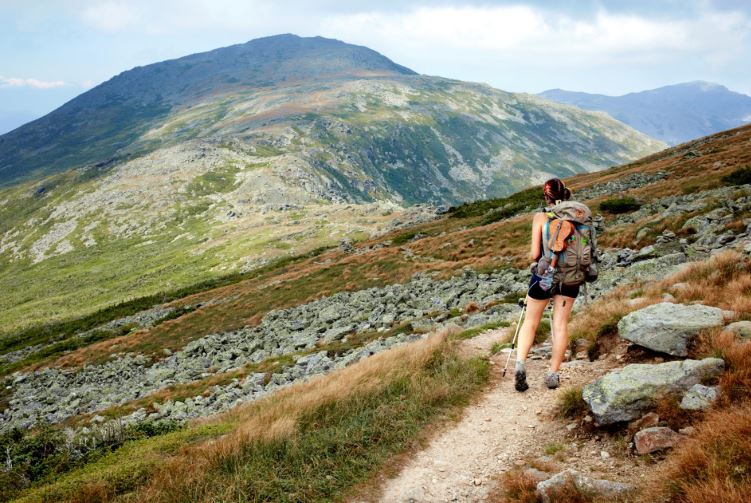 With trails opening, is it safe—or ethical—to go hiking this summer?

With trails opening, is it safe—or ethical—to go hiking this summer?

June 7, 2020
Under One Ceiling
Summer is officially here, and that means millions of people nervous about flying in the age of coronavirus will likely hit the road in a car. As America’s national parks and forests start to reopen, many vacationers are looking to stretch their legs out on the trails, from Alaska’s Glacier Bay National Park and Preserve to Virginia’s Shenandoah National Park.

In ordinary times, a surge of hikers would be a boon for the picturesque gateway towns near these popular outdoor destinations. But during a pandemic, locals whose livelihoods are largely built on seasonal tourism are forced to reconsider the cost-benefit ratio of welcoming hordes of out-of-towners searching for that perfect waterfall picture or alpine vista.

That’s especially true in native lands, like Navajo Nation, situated near popular recreation areas like Grand Canyon National Park. With 5,250 cases to date, Navajo Nation has one of America’s highest coronavirus infection rates, making it particularly vulnerable to an influx of tourists.

Some backcountry communities have avoided disaster. The small and often underfunded regional hospitals that serve these areas haven’t been pushed to their breaking points yet. And the grocery stores are fully stocked, saved for the time being from visitors clearing shelves and leaving residents with a shortage of supplies.

Part of the low infection numbers may be due to these towns’ geographic isolation offering something of a social distancing buffer. But that could change as summer gets underway, bringing with it urbanites seeking to escape their COVID-stricken environs.

North Conway, New Hampshire, is a prime example of a backcountry recreation village. It rests in the shadow of White Mountain National Forest, a half hour’s drive from popular trailheads. The central strip offers brewpubs, burger joints, and hotels with names like Eastern Slope Inn and the Swiss Chalets Village Inn. From a grassy rest stop on the north edge of town, you can gaze out at the pinnacle of Mount Washington.

It’s an ideal place to hang your hat—or trekking poles—after a lung-buster of a hike. As such, seasonal tourism is a pillar of North Conway’s economy. In some years, the year-round population of 2,000 swells with an additional 17,000 visitors flocking here from nearby Boston and New York City on weekends alone to put their feet up in the rental cottages and second homes nestled in the hills and hollows.

To date, Carroll County, which includes North Conway, has confirmed 37 COVID-19 cases. The actual number could be higher, given the shortage of test kits in New Hampshire and the role that asymptomatic carriers might be playing in spreading the virus. The “outbreak” here isn’t remotely comparable to what’s happening in large American cities and suburbs. But locals are preparing for the worst as temperatures rise and city folk get tired of baking bread.

“We’ve been a little worried about an influx of people from out of state because in this particular instance, the prevalence [of COVID-19 infections] has been much greater outside of our border,” says Dr. Antonia Altomare, an infectious disease and international health specialist at Dartmouth-Hitchcock Medical Center,in Lebanon, New Hampshire, about two hours by car from North Conway. “We just started antibody testing in New Hampshire and we’re finding that less than 4 percent of our population has detectable antibodies. What that means for immunity is still unclear.”

Rick and Celia Wilcox are preparing for the crowds. The owners of International Mountain Equipment in North Conway are allowing 10 to 15 customers at a time into their 10,000-square-foot climbing school and outdoor gear shop, with its labyrinthine consignment basement. They’ve stocked up on disinfectant and will be asking customers to wear masks and keep six feet of distance at all times.

Even with the precautions, Rick Wilcox is optimistic that visitors from coronavirus-stricken cities will be especially mindful about social distancing best practices. But he acknowledges that this year, summer tourism is a controversial topic with some business owners, given that about 75 percent of their customers come from outside the state. “We’re looking for those folks to come up here, recreate, and do it safely,” he says. “But folks who are scared of people coming from the city and bringing the virus north would probably say, ‘Well, they’re gonna go into your store and you’re gonna get sick.’”

Safety on the trails

Going on a hiking getaway while minimizing exposure to backcountry communities is trickier than it may seem. Sticking with day trips, social distancing on trails, and avoiding restaurants is easy. But how do you handle gas station fill-ups in rural towns? What if you find yourself in need of a toilet, or a mechanic, if your car breaks down? Worse, what happens if you twist an ankle or succumb to heat exhaustion in the wild?

America’s search-and-rescue (SAR) providers have struggled to stay solvent as millions of new hikers have flocked to parks and public lands in recent years, straining the resources of the volunteer-dependent organization. The pandemic has added complications.

“This spring, we really had to scramble to get the proper [personal protective equipment (PPE)] that we needed,” says Drew Hildner, a Boulder, Colorado, resident and a medic with Rocky Mountain Rescue, one of the largest SAR providers in the U.S.

Unlike large ambulance companies or fire departments, SAR doesn’t have big accounts with medical suppliers because they don’t need them. “Normally, we’re not burning through our equipment and we’d make infrequent orders,” Hildner says. “We ended up crowdsourcing masks and other PPE items.”

Even with a new supply of PPE, including N95 masks, secured for now, Hildner notes that the occupational hazards of treating patients during a pandemic could nonetheless impact the scale of SAR operations.

“We’re currently on pace to have our third busiest rescue season in our 73-year history,” he says, alluding to the heavy usage the Boulder-area trails have already seen, since the pandemic began. “Because we’re trying to limit exposure, we are very quickly capping our SAR response teams, once we have the minimum number of people required for any given rescue. Most of these rescues require at least 10 to 15 people, and if we end up with a patient who tested positive for COVID-19, those 10 to 15 SAR volunteers would have to be in self-quarantine for the next two weeks. And if that happened twice in a row, then we’d be pretty hard-up for response.”

For road-tripping hikers, these questions are mostly ethical. But for rural communities, they may be existential. Back in March, when the pandemic lockdowns began, the town of Moab, Utah (a base camp for Grand Canyon tourists) urged non-essential visitors to stay home, stressing the region’s limited healthcare infrastructure.

Island communities in MidCoast Maine put out a similar notice to seasonal visitors. “Every additional person who comes here is just putting one more stressor on what we have for resources, whether it be the grocery store, the gas station, our EMS system,” said Marc Candage, the fire chief and emergency management director of Vinalhaven (home of Maine’s largest lobstering fleet), in an interview with Maine’s local NBC News affiliate.

These requests to stay home aren’t made lightly. Tourism in America, a trillion dollar industry, has thrived in recent years. The U.S. Travel Association found that in 2019, four out of five domestic trips taken within the U.S. were for leisure. A sustained nosedive of seasonal travel could mean a disproportionately painful economic punch for rural communities that normally attract hikers and other outdoor recreation enthusiasts. The Bureau of Labor Statistics’ April jobs report found that the coronavirus pandemic has already wiped out more than 7 million leisure and hospitality jobs.

These industries are a big deal in outdoor tourism towns. Consider national park “gateway communities” such as West Yellowstone, Montana. A study by Resources magazine found that in West Yellowstone, tourism-related jobs comprise 37 percent of all local jobs. The study also highlighted western towns such as Springdale, Utah (gateway to Zion) and Cortez, Colorado (gateway to Mesa Verde). The takeaway was stark—in each town, tourism jobs accounted for at least 12 percent of the local economy, but usually much more. To date, the federal government hasn’t come up with any plans to bail out these communities.

As a result, would-be vacationers face uncertainty and frustratingly differing rules. Vermont and Maine have instructed all visitors to self-quarantine for two weeks upon entering the state. But in towns like North Conway, there’s no blanket directive for out-of-state hikers who are thirsting for hemlock evergreens and krummholz, the gnarled bonsai-like trees that grow at the timberline. Hikers are being urged to wear masks and keep their distance, though small towns don’t have the resources to enforce social distancing measures.

You could sense this relief that the deluge of tourists was finally over and people could go back to their towns, and I felt like a fraud.

All this uncertainty is causing some vacationers to rethink their summer plans. Jonathan Rosenfield, a social worker based in Boston, has put his usual northern New England hiking plans on hold.

Instead, he’s begun taking localized “urban hikes” around the weird side streets and forgotten parklets of the city. “I’ve been discovering all sorts of gorgeous dead ends and pretty houses around where I live,” he says. “I much prefer the natural world with no noises from cars, but I like seeing new things.”

Alison Dunn, a wine industry professional, has taken a similar approach to summer hiking. She’s been scaling the hills in Dorchester, her neighborhood and one of Boston’s most COVID-stricken communities.

Dunn had been planning to take part in a fundraising ascent of Mount Washington this summer, for the benefit of the mountaintop weather observatory. But that’s not happening anymore.

For Dunn, who grew up in a small town in Georgia, a summer without backcountry hiking is a sacrifice that feels like the right thing to do, especially now. It’s a lesson she learned last year, when she saw firsthand how locals felt at the end of the fall foliage season in the Whites.

“You could sense this relief that the deluge of tourists was finally over and people could go back to their towns, and I felt like a fraud,” she recalls thinking back then. “I’m from a small rural town in the countryside, and I want to respect these towns, because I’m a visitor. And yet, here I am. You can see my [Massachusetts] plates in the driveway.”