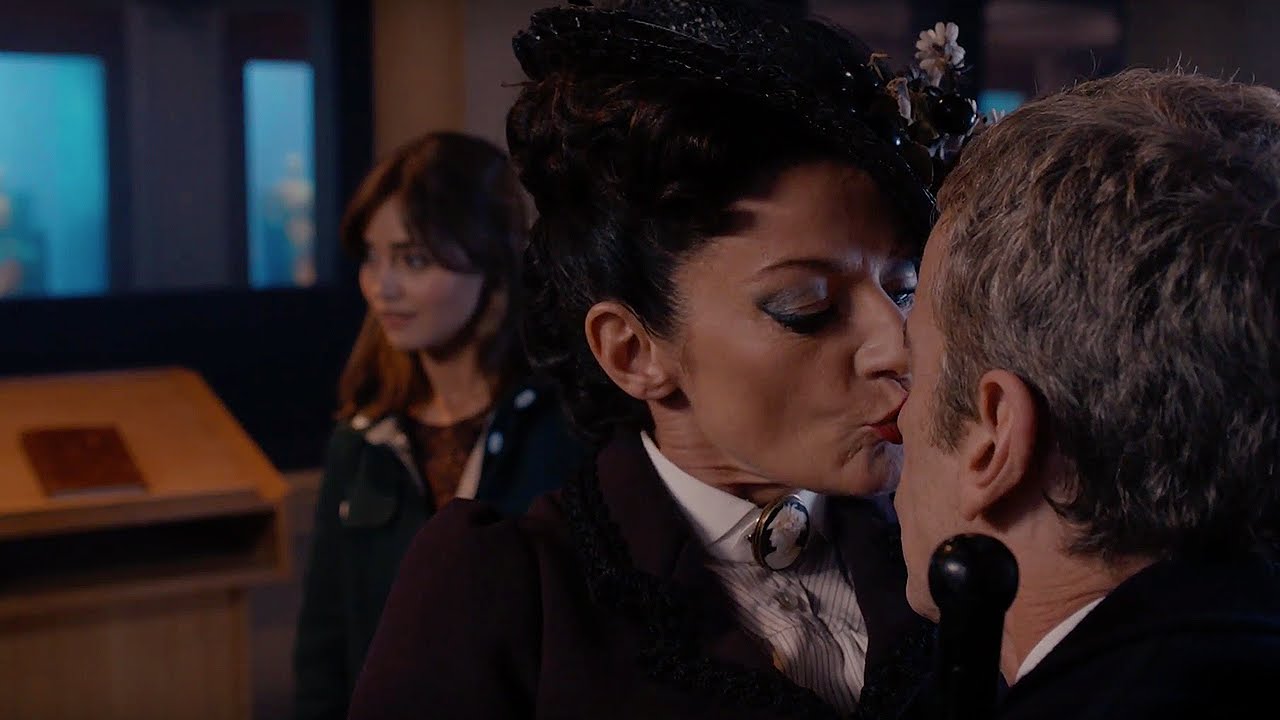 Welcome to Thanks, I Love It, our series highlighting something onscreen we’re obsessed with this week.

From the moment she emerged from a spiked time machine with a bold red lip and a familiar face, Doom Patrol watchers knew Madame Rouge (A.K.A. Laura De Mille) would be up to some delightfully deranged mischief. How could she not be? You don’t cast Michelle Gomez for anything less.

With a dangerous smirk and penetrating gaze, this scintillating Scottish character-actress has made her mark on a string of series playing vivacious villainesses. On Doctor Who, she portrayed the epic antagonistic Missy, who looked like a malevolent Mary Poppins but hit harder than an army of Daleks. On Chilling Adventures of Sabrina, she swiftly made a turn from sweet spinster to the sultry Madam Satan, who manipulated Greendale residents as if they were marionettes. So, when Gomez burst onto the street of Cloverton, fans of her work may have smelled a baddie right off. Personally, I was utterly elated to see her marking new territory with her unique brand of badassery.

Doom Patrol has always been an outrageous adventure. But the addition of this actress with character to spare promised that Season 3 would be its wildest yet.

“When she jumps out of a time machine and pops a squat, it’s like, ‘There you go!'”

Gomez’s rogues often wield a confidence that embraces the brazen, whether she’s kissing the snoot of The Doctor or swaggering up to hostile coven. In Doom Patrol, Madame Rouge’s bawdy introduction gave Gomez free reign to embrace an untamed physicality for the character. “Well, really the invitation was there from the beginning,” Gomez told Mashable over a phone interview, “When she jumps out of a time machine and pops a squat, it’s like, ‘There you go! And, where do I go from there?’”

When Doom Patrol creator Jeremy Carver approached her about the part, he led with the plot point that Madame Rouge doesn’t remember who she is because of a time travel mishap. Gomez was enchanted by the possibilities, saying, “Oh, wow! I could actually be anything. I could do anything.”

Season 3’s focus is on the mystery of Madame Rouge and her connection to the curious Sisterhood of Dada. Gomez had her own mystery to unravel in playing this part. So, she followed the clues, from the wee in the street to the show’s incredible costumes, which include an aviatrix jumpsuit, menswear snatched from the late Niles Caulder’s closet, and — as we see in “1917 Patrol” — some shimmering gowns rich in glamor and sex appeal.

“The costume is a huge clue for me, always,” Gomez reflected on Madame Rouge’s remarkable wardrobe, “I’m one of the old school actors — because I’ve been around for a minute. But, it’s all about from the shoes up. Once you’ve got whatever the shoes might be, they dictate how you walk and stand. It’s like literally walking in somebody else’s shoes.” She adds that “these phenomenal, ridiculous outfits…inform me enormously of who I am through how they make me feel.”

The next clue to unlocking Madame Rouge came from the holder of Niles’ key, fretful Rita Farr. Where Laura is a bold free spirit, Rita is consistently held back by her self-doubt, which literally turns her to goo. “They say opposites do attract,” Gomez mused, “I think there was a big attraction between the two of them, in that they were seeing something in each other that they don’t have, but that they would like.”

Then Gomez took the words out of my mouth, describing the blossoming bond between these marvelous metahumans by saying, “I loved their dynamic. I loved our energy together. I thought it was really fun and adorable at times. And, it felt like we were both being really naughty. And let’s see where that leads.” Then, she teased, “Nowhere good, I imagine.”

She credits April Bowlby for how sensationally this duet performance plays. “She’s just phenomenal,” Gomez declared, “I always say this, ‘You’re only as good as the people that you work with.’ So, thank God she was good! Because it only made me better.”

The final clue on Madame Rouge came from the show itself, not the comics that inspired it. “I felt like the context [for the character] was the show,” Gomez said, noting that she was hooked by the first five minutes of the Season 1 premiere. “I felt like Doom Patrol, the show, had laid down its own marker. I wasn’t up to speed with the comics beforehand — I am a little more now, obviously. But, for me, always the blueprint of anything that I do is already on the page. And so, it’s all about the scripts. And, that’s where I begin.”

Whether she’s fleeing from fog, rallying the grumbling Doom Patrol troops, or galavanting with the Sisterhood of Dada, Madame Rouge is a woman who refuses to be defined on simple terms. In her quest, she seeks to determine: Is she a hero or a villain? A savior of the Sisterhood or a vile traitor? What if it’s both? What if — like the show’s titular super frenemies — there’s no such simple definition of good or bad?

This moral grey area was a treat for Gomez. “She has started to understand that perhaps she isn’t who she thinks she is,” the actress said of Madame Rouge’s journey of self-rediscovery. “She isn’t who she hopes she might be. And, she perhaps might not be somebody that she can’t ultimately accept. And, where’s that going to lead to? How is she going to move forward with the understanding of who she is?”

“It felt like I brought all the other characters that I played before and they were all there in the room with me.”

“The word ‘challenge’ makes me feel like it was difficult,” Gomez said, “And it didn’t feel difficult. It felt like I’d come home. It felt like I brought all the other characters that I played before and they were all there in the room with me on the day. It was a wonderful experience. And, I loved every minute of it.”

Us too, Michelle. Us too.